Back to  Blogs
Buenos Aires

If you come to Buenos Aires to spend some days, weeks, or even months you will find some cultural differences in the bigger picture. But as well you will face interesting, annoying, and funny things in everyday life that are way different from what we are used to at home. Travelling is all about that! I'll describe an unsorted mix of some of the most interesting things which might be of use for the tango traveler.

Buenos Aires is a huge city, and since the surrounding county is named Buenos Aires as well, people here distinguish the City of Buenos Aires and the Provincia de Buenos Aires. The city is mostly named "capital federal" or just "capital" versus "provincia" (de Buenos Aires). It is important in some points of transport (in capital you have taxis going on the streets and you can just stop one by your hand sign (for more transportation info see here), while in provincia you have to call a remise to get car transport), telephone numbers, and slightly higher prices on colectivos. 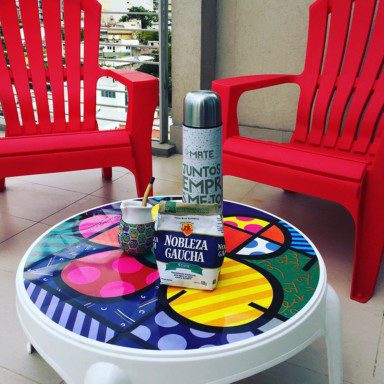 One of the signature drinks of Argentina is mate. It is a kind of tea or herbal infusion, which is drunken in a certain way. You need: hot water (ca. 80 degrees celsius), yerba (the tea, if you want to say so), the calabaza (the mug-like thing from which you drink, traditional an empty small pumpkin, nowadays often a mug from porcelain or plastic), and the bombilla (the straw). Drinking mate is a social ritual, usually people drink mate together, they share it. So the calabaza is filled with yerba, shaked well, then the bombilla is placed inside, and slowly hot water is filled in. Then the person who offers the mate usually drinks the first portion. Water is filled in again, and the mate is given to the next person. He or she drinks is (empties the mug) and gives it back to the giver. He refills water, gives it to the next person, and so on.
It is important to follow some basic rules while sharing mate with your friends.
1) Never touch or move the straw, don't even think about moving the straw inside the yerba. If somebody is eligible to do so, it is only the mate owner. There are different customs of having the mate, but never touch the straw while drinking is the safest thing for you.
2) If you hold the mate in your hand, don't talk. Drink. If your friends tell you: "the bombilla isn't a microphone" they mean you should stop talking and pass the mate back.
3) If it's too hot to drink it - go on, drink it, and don't make a face. Get used to hot mate.
4) If you give back the mate, don't say "thank you" until you don't want more. The "gracias" in the mate ritual means you don't want more. Be aware :-)

If you are invited for a sunday afternoon to have "mate y facturas" in the park, it doesn't mean you will have tea and invoices. You will meet your friends in the park, sit or lay down on the grass, share mate and eat sweet little cookies, cakes, and maybe medialunas (a kind of croissant). This can go on for hours, and is a very typical way how the "Portenos" spend their sunday afternoons.

The second most important signature drink is "Fernet". It means you take a glass of Coca Cola and mix it with Fernet Branca, an Italian herb liquor. If you feel this will probably taste like a strange medication, and look a bit ugly with a kind of dirty foam on top, it does. Still, at the milongas or at asados many people drink it, and Argentinians living outside of Argentina are quite unhappy if they can not get fernet. Try it at least and make up your mind about it. I couldn't find the point of enjoyment in it, but I'm only a traveller.

Beside having mate y facturas in a park, a typical thing to do on a sunday is the asado. Usually quite a bunch of people will meet at a friend's house, maybe outside capital. If it begins officially at 13 h, you will eat not before 15 h, sometimes even not before 17 h. The asado needs a barbecue, and different types of meat, sausages, rather unlikely vegetables to roast. If you are a vegetarian invited to an asado, bring some veggies to roast with you. Most Argentinians have no real relation to vegetarianism, and can surprise you with an answer like "You are vegetarian? Ok, we have some chicken."

Argentinian men are very proud on their abilities to make a good asado, never mess with them, never try to do something on the grill yourself, trust the guy(s) at the asado. Have a beer, or fernet, chat, and wait. If you are lucky there will be some salad to accompany the asado, maybe some potatoes as well, and/or some bread. But definitely meat is the most important thing. Compared to Europe the meat used for asado is often different, it is ribs, but no filet, and some other different cuts of meat, plus chorizo (sausage), plus kidneys and some other innards.

The asado can go on for many hours until the night, it depends on the people and location. But usually it is a party with lots of meat, alcohol, jokes, and fun together with many people. If you are invited to one, go there in any case, it is a very good way to experience Argentinian day-to-day culture.
Back to  Blogs