Back to  Blogs
News

Tango video channels, are they worth it?

This post is a bit unusual for 030tango, as it touches on the reason why this platform exists and what we are trying to achieve with it. It is about the question if it is sensible for Tango professionals to cooperate with a dedicated video channel, instead of doing it all yourself.

The following post is targeted towards Tango organizers and Tango teachers – Tango professionals – but maybe other dancers find it interesting too. We’ll talk about why videos matter to you (and why they should not) and compare a bit between different channels. 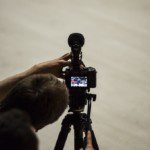 Why should one make Tango videos?

The first question is: why videos at all? As a Tango artist, there are basically two reasons: history and promotion. A lot of work goes into organizing a festival and being a performer. You will want to remember that work and everybody else should too. The Tango culture is decades old, but the oldest videos you can find for free are rarely older than 30 years, if you are lucky. A lot of festivals that happened 5 to 10 years ago are lost to all future dancers, with all the performances that happened there. This was actually the main reason 030tango was founded in 2013.
Don’t let your hard work and art be forgotten! If you want your legacy to be remembered, it is your responsibility to have a high-quality documentation made!

The second point why videos are important for you is promotion! Build your audience! Each weekend there are events all over the world (we are counting six high-level events in or around Europe at the end of May 2017 – on the same weekend). Although Tango dancers like to travel, you still have to be visible!

Festivals have to build their brand and stay visible throughout the year. So, when it’s time for the dancers to decide where to go, they will know the name and have good memories of the place. This does not only apply to festivals that try to increase their numbers. Especially when your event is performing well, you should use that momentum to implement a long-term strategy to be a lasting success.
At the same time, more and more teachers compete for these festivals. Not just Argentines – talented teachers and performers from all over the world! A festival will more likely book performers who have got a fan base that fills their classes and milongas. Videos are a perfect way to connect with your audience and bring them to events you will be attending. Stay visible and show the organizers, that you put in that extra effort!
The one thing that won’t happen through videos (at least on platforms like YouTube or Facebook) is earning a direct income. Due to copyright issues, basically all advertisement income on YouTube goes to the copyright owners of the music. It is a fair price to pay to be able to publish videos at all, but you won’t become a YouTube millionaire with Tango videos. Selling educational videos is another topic. While it is a huge amount of work, that could be a way for you to earn a regular income with teaching Tango. 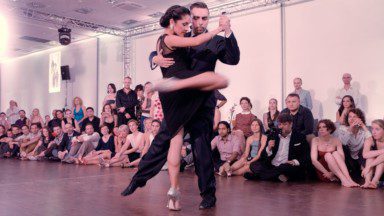 Maintaining a YouTube channel and Facebook page is a lot of work. In addition to that, all major search engines favor content from channels that have a steady flow of new content. This actually applies to all social media pages, be it YouTube, Facebook or Instagram. Ensuring a steady stream of content is tough.
Festivals normally happen once a year and there are few Tango dancers that perform every weekend all year long.

Events and dancers seem to compete with each other, but quality on all levels will stand out. Social media should be a part of your promotion strategy and it makes sense to cooperate with other high quality artists and events. If you stay on your own, your videos will do too. A strong platform can help artists and events shine.

What is a well performing video?

How does one measure the success of a video? The easy answer would be: the more clicks, the more successful. But only few festivals can survive with hiring just the biggest Tango stars we have nowadays and not all teachers can be the number 1 couple. Having a super successful video is a lot of luck (or will cost you a lot of advertisement money). But ideally, all your performances should get a certain amount of exposure.

At 030tango we don’t rest on the laurels of our most successful videos. We care about the performance of every single video. Is it possible to measure how videos perform and where they perform best? At 030tango, we chose two performance figures to see how successful we are with distributing our videos.

First of all, we chose how many clicks we have on an average each day. Over 50% of our access numbers actually come from video recommendations on YouTube. We all know this function and content from the same channel is heavily favored there. The effect is even stronger with new videos. This means our past videos are sending a steady stream of users to our newer content and the other way around.

The second number that is important for us is the average clicks a video has on our channel. You never know which video will be a huge success. Sometimes it’s the low-key recording done with a mobile phone that was uploaded the same night a performance took place. Being fast often beats quality. But for Tango professionals, it is important to know what they can expect from their videos on a channel. This especially benefits not so well known artists and festivals. They have to build a fan base and benefit the most from an already established platform.

The numbers for Tango video channels

For the past months, we gathered data from different YouTube channels. Dedicated video channels, channels by well-known festivals and some of the more successful artist channels. Sometimes a chart is the easiest way to get an overview, so here we go.

First, we will show you how many average clicks different channels had on YouTube over the last 10 months (note that for some channels we didn’t take numbers every month and averaged over several months. (This includes Aires de Milonga from May till August and Murat Erdemsel from May till November.) 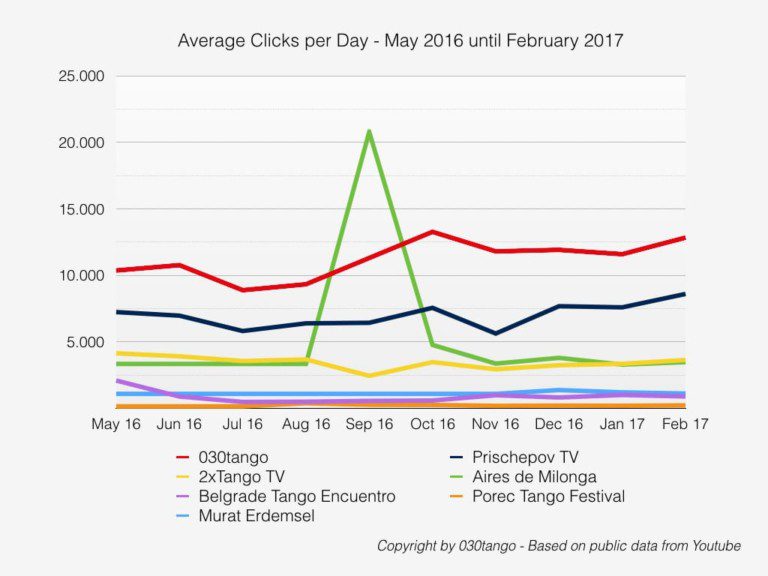 You will notice right away that the dedicated video channels have way higher access numbers than all other channels.

Some channels might surprise you. 2xTango TV has been mostly inactive for several years. So, while overall, they have the most clicks of all Tango channels we could find, their daily numbers are going down over time. Very interesting is the September 2016 figure. Aires de Milonga had by far its most successful month of any channel in 2016. They were the only ones present at the Mundial in Buenos Aires and there seems to be a huge interest in this competition. Afterwards they pretty much went back to their usual numbers.

We added two festivals that are very good and active in their public relations work, the Belgrade Tango Encuentro and the Mediterranean Summer Tango Festival, better known as Porec Tango Festival. Additionally, in this statistic we added one of the biggest channels of an artist, the one of Murat Erdemsel. He has been actively working on his YouTube presence for years and is one of the most successful artists in this regard.

The second chart shows you how many clicks a video has on average on different channels. 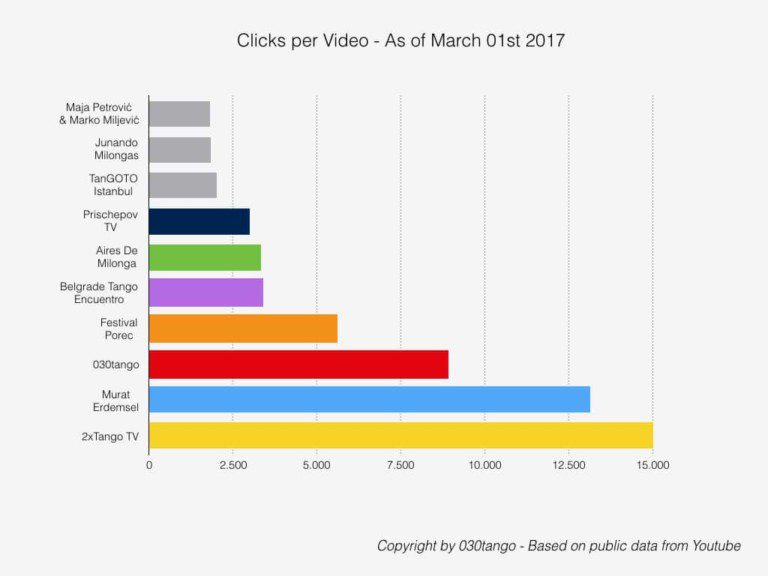 2xTango TV again stands out, as they don't have a steady flow of new videos with lower numbers. As they started publishing some videos again, we'll see if this number changes over the next year.

Murat Erdemsel has been controlling the videos of his performances for years, so you have to go to his YouTube channel to watch him. As we see, he is quite successful with this. If it is still possible to do so nowadays, with that many cameras and phones around, you have to consider this for yourself. Also, his first videos on the channel date back to February 2007. A massive amount of time and patience went into this project.

A more recent example is the YouTube channel of Maja Petrović and Marko Miljević. They also have a very extensive channel of their performances that goes back to October 2011.

Despite having mostly very famous artists at their events, the festival channels fall short of expectations in this regard. This surprised us when putting together these numbers and it’s hard to say why it is this way. Our best guess was that YouTube penalizes channels that only post that much once a year. On the other hand, the channel of the Belgrade Tango Encuentro is busy all year round. Without having a look at their analytics, it’s impossible to say where the big difference in traffic and average traffic for each video is coming from.

So are Tango video channels worth it?

Let’s go back to the question this text is all about: Tango video channels, are they worth it?

This depends on what you are aiming for. If you just want to document your performances or events and it does not matter how many people you reach: do your own channel.

For all Tango professionals who have a huge interest in reaching as big an audience as possible: Find a partner to work with, who covers more than you or your festival. The bigger the platform, the more everyone participating will help each other! While you are preparing for your next festival or performance, other artists help grow your potential audience and when it's your time for the spotlight, you reach more people and help them. Everybody wants a bigger slice, but let's make the cake bigger too. Tango is a small and worldwide community and we should work together to reach as many people as possible – Tango dancers and beyond!

No matter how you decide, we wish everyone who produces high-quality content out there good luck! We know how much work goes into it and appreciate your work a lot!

All numbers have been taken from publicly accessible data on YouTube (www.youtube.com).
Back to  Blogs